Happy Pancake Day! I love a classic British pancake but sometimes I want something that feels more luxurious, and for me American style pancakes really hit the spot.

The light fluffy texture soaks up butter or sauce beautifully. I had mine with homemade salted caramel sauce and copious amounts of chocolate spread. Delicious.

In a large bowl sift together the flour, xantham gum, baking powder, salt and caster sugar.

Beat the melted butter into the flour mixture, with a fork as a mixer will send the flour flying everywhere.

Take the egg whites and beat with a stand or hand held mixer using a clean balloon attachment. Beat until the egg whites form soft peaks that hold their shape and almost glisten.

Pour half the milk into the flour batter and beat with a mixer until there are no lumps. Add the rest of the milk a bit at a time, beating between each addition.

Gently fold the egg whites into the batter using a wooden spoon. Do this slowly so that you don’t lose the air you’ve beaten into the egg whites. Set the batter aside for 5 minutes, you should see air holes in the mixture when it is ready to use.

Heat a frying pan over a medium heat and add a knob of butter once hot. The butter should melt straight away if the pan is hot enough. I usually measure my batter out with a ladel. Slightly under one ladel is a pancake for me.

If you make a circle motion with the base of the ladel once you’ve poured it into the pan, this will help make the pancakes nice and round, aim for 1cm thick. Cook for a few minutes until air bubbles appear on top, then flip and cook a further few minutes until golden on both sides.

Serve warm with your choice of topping. If you have leftovers you can always pop the pancakes in the toaster to reheat. 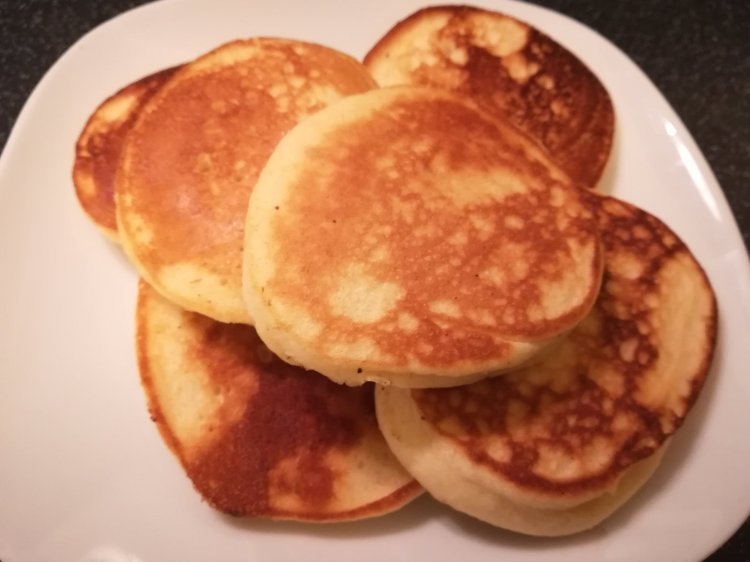